When the Write Door Opens -Matthew 7:7

Well, we’re here, again. It’s been almost 8 years since Carson’s last cleft surgery, but 8 years is still not long enough. Those memories flood back on you, and you have to fight that punched-in-the-gut feeling.

Psalm 4:6 “Be anxious for nothing…” kept running through my heart and mind, as they prepped Carson for today’s bone graft surgery. 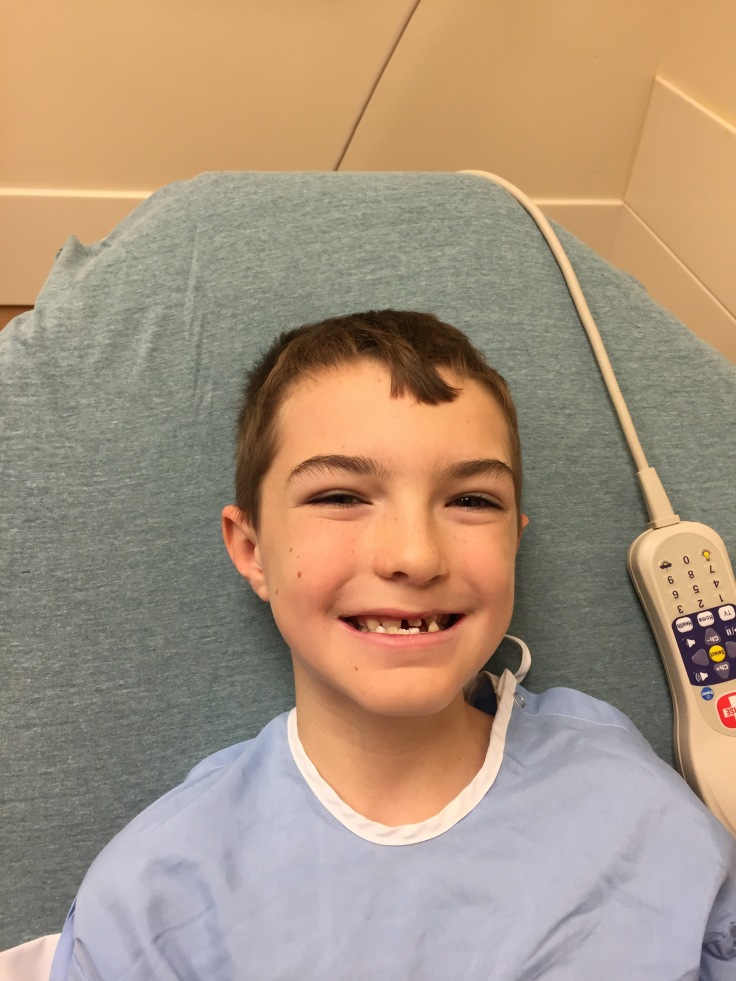 He, of course was so excited to be watching a movie and had already exuberantly picked out the cherry flavor for his silly gas he would soon be breathing.

We walked into the room where he was supposed to get his silly gas, hold Mama’s hand and slowly and peacefully slip into his sleepy state, but that’s not exactly how it happened. The anesthesiologist waltzed in, gave Carson a fist bump and said, “Hey!! You like cool Science stuff!? I’ve got some awesome stuff to show you in the Operating Room! Want to see?!”

Carson said, “Yes!”, waved to us, said “bye,” and that was it. The operating door closed behind them and we were left staring at the door with the nurse.

Not quite what I had planned, but I should know by now that nothing goes according to my plans (thank goodness). God always has the better plan.

Be anxious for nothing…Carson had surly grasped that truth.

The faith of a child…I needed to grasp it, now.

We walked toward the cafeteria to grab a bagel, and that’s when my blessings list started to grow. We began to pass children who were swollen from chemo treatments, children in wheelchairs who would probably never walk again, children with tubes and wires and braces and crutches. As we passed them, I could envision my little petty problems dropping to the floor and being crunched by those kid-sized wheelchairs. No, Carson’s surgery was not just a petty problem, but I could praise the Lord that after only 5 hours we were headed home.

I couldn’t have said it 8 years ago, but today I can truly say that I’m thankful we are “only” dealing with cleft lip issues.

So, this year on Thanksgiving, everything may not be perfect, but God is good and we are blessed. This year, that’s enough for me.

If you’d like to read more about having joy while accepting your child’s cleft, or read about some ideas that were successful for us, when taking care of a child with a cleft lip and palate, click on the links below.

The story of Mr. Wiggles–having joy while accepting your child’s cleft

A Book Signing and a Surprise Guest…

Writer of It Is Well With My Soul

Well, it’s official! I had my first library book signing yesterday evening. It was a great experience and encouraging to have, among the group, a couple of teenagers. One of them was a 15 year old girl interested in writing. As I looked at her, it was amazing to think that I was about her age when I began writing A Light in Bailey’s Harbor. Time sure does fly!

I’m thankful for my family who came and supported me, husband who herded the kiddos, and for 2 wonderful surprise guests!

I had just started speaking about my inspiration for writing my novel–how my best friend, Alicia, and her family took our family on a trip to Bailey’s Harbor, WI, where I fell in love with Cana Island Lighthouse. Just at that moment, Alicia and her mom (Mama Debbie) walked in the back door. I immediately teared up and couldn’t talk for a few minutes (and I’m definitely NOT a pretty crier), but after regaining my composure, I was able to introduce the group to the very people who provided the inspiration for me to write A Light in Bailey’s Harbor.

I’d like to end this short blog by giving a few tips on how to make a book signing more successful:

Hopefully, there will be more book signings in my future and more books to sign.

One more friendly reminder to please, please review A Light in Bailey’s Harbor on Amazon.com.

1.Just click the “amazon reviews” icon below, and it will take you to Amazon.com.

2. Scroll down to “Write a Customer Review.” Thanks!

Have a wonderful week!

Can’t believe I’m announcing this, but I’m having my first public book signing for my novel, A Light in Bailey’s Harbor, on Monday, August 8th at 6:30-7:30pm! 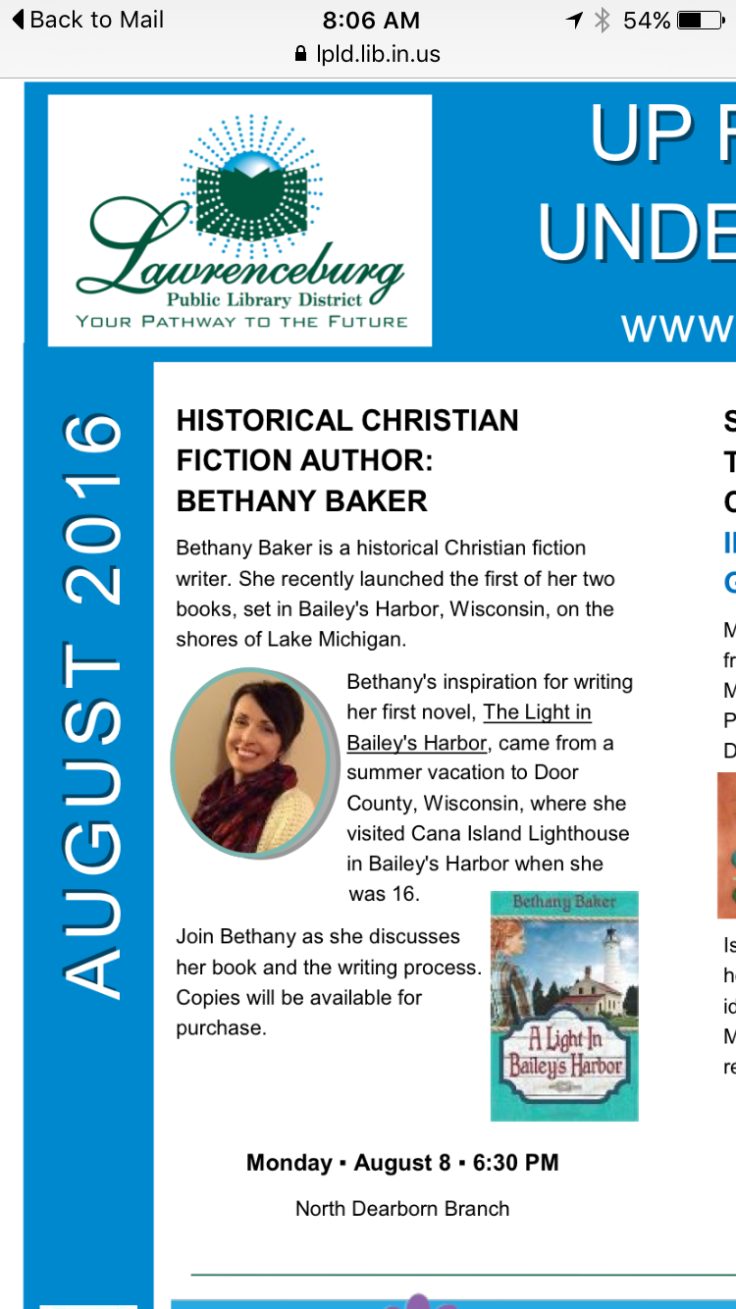 If you live in the area, I would love to see some familiar (or brand new) faces! Click the link below to see the location of the North Dearborn Library. After clicking the link, click “Get Directions” to map it from your location (because I can’t, for the life of me, figure out how to get the map to link up right to this page!)

One last thing, if you’ve read A Light in Bailey’s Harbor and haven’t reviewed it, please take a minute and review it on Amazon! That would greatly help me out.

Just click below, and it will take you directly to it!

Have a wonderful weekend!

What an awesome privilege I had last week to be a part of a FaceTime, book club discussion in DeLand, Florida.

It really does amaze me that a group of 12 ladies would set aside an evening to discuss a book that I’ve written! I still have to pinch myself on that one. The ladies were all calling the characters by name, asking to know what would happen to them in the next book. They spoke of each character like they were a neighbor or a friend from church. I had to keep my mouth from dropping open.

The most amazing part of the night was that after answering questions about why I included various characters, the struggles of their faith, and the way the Lord worked in their lives, I found out that this book club was not an all-Christian group.

It had never occurred to me that my book would reach non-Christian readers. What an exciting moment the Lord provided to encourage these women and to plant seeds. I now have a far greater reason to continue to work on the sequel.

I’m so thankful for this opportunity and pray the Lord will continue to use A Light in Bailey’s Harbor for His glory.

A Light in Bailey’s Harbor is Book Club Bound

I was so excited to hear that my novel, A Light in Bailey’s Harbor, is now Book Club “worthy.”

It’s true! One of my blog and FB author page followers asked me if I would mind my book being read in her ladies’ book club. Of course, I had to think long and hard… Of course!

Truthfully, I am honored that someone would want to sit around and discuss my novel! It is what I prayed for while writing the book, that God would use my words to encourage others in their spiritual walk.

Also, I will hold a FaceTime session with this book club on Monday evening so they can ask questions and share comments about A Light in Bailey’s Harbor. It’s exciting to see how God can use an author from Ohio to write a story set in Wisconsin to touch the lives of a group of ladies way  down in Florida.

When the Write Door Opens -Matthew 7:7

Less Than Perfect Life of Bliss